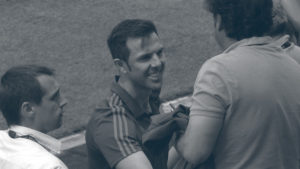 From the FSI we are proud to welcome Carlos Marchena to our blog. As a professional player, Carlos has had an exemplary sports career.

It reached over 600 official matches, an amount hardly exceeded by most professional players. With the clubs in which he played he played the most important competitions that an elite soccer player can play and won titles such as the Spanish League, the King’s Cup and the UEFA Cup in addition to two Champions League finals with Valencia CF . With the Spanish team he was the U20 world champion and later in the absolute category European and World champion.

“Over 600 official matches, an amount hardly exceeded by most professional players”

In this interview we have asked Carlos about the reasons that explain this successful career. Reviewing the most decisive moments of his professional career such as his training stage, first division debut, or stage with the team in which he was world champion.

Of the players I have trained, Carlos is one of those who leave your mark and make you learn as a coach. Personally, their human quality is total and professionally it is on the threshold of excellence. Carlos was a genius at the time and his reflexive ability and his intention of constant improvement explain his success. But who better than him to explain to us with his words all these details.

In the interview Carlos brings a multitude of knowledge and experiences. I think this knowledge is very useful to many of us. It transmits messages addressed to the parents of children who want to be soccer players, to the players in formation that belong to elite team academies, to young players that are going through an injury, etc. These messages are the result of his personal experience and also for his professional experience after the sports career in which Carlos has been coach of the Sevilla FC quarry and now in sports management. This new role gives a vision if it is more global of the entire training process of the football player. It is a pride for FSI to be able to offer an interview of such formative quality. We hope you enjoy it.