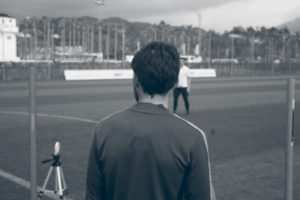 Sprinting is an essential high-intensity action during playing football. Research into sprinting during match-play (i.e. Bradley et al. 2009) has tended to focus on total distances covered or a number of efforts above a predetermined threshold (i.e. above 24 km/h). In this regard, it has been shown that players mostly sprint over distances shorter than 10m, up to 60 times per game, varying as a function of the competitive level and the playing position (Barnes et al., 2014; Bradley et al., 2009).

Little is known about the characteristics of the sprinting during a football game (i.e. game-context situations, trajectories, contact or not during the sprint, etc). Practically no information exists about the game context in which sprinting happens. It seems reasonable to think that the presence of the ball-opponents and/or the proximity to the football goals are essential “game-context” variables in each sprint. In this sense, one of the few studies done on this topic found that on average, 64% of the goals scored during official matches in the German National League were preceded by short-sprints (Faude et al., 2012). These results highlight sprinting as an essential action in many scoring goal situations. However, further studies analyzing the game context of sprinting are still required.

In the last year, several studies have analyzed the trajectories of sprinting during football match-play. Surprisingly, these studies have observed that sprinting in football is very rarely linear. Caldbeck (2019) found that ~85% of football sprints were made on curvilinear trajectories, compared to less than ~20% of straight sprints. Fitzpatrick et al., (2019) observed that the average sprint angle performed was ~5º, however, most players were required to perform curved sprints with an angle of up to 30º. These authors also showed that center forwards, on average, performed the larger angled sprints and a greater number of sprints at angles 10-15º, and +15º in comparison with the rest of playing positions.

“~85% of football sprints were made on curvilinear trajectories, compared to less than ~20% of straight sprints”

It can be speculated that center forwards use these curvilinear sprints to avoid being offside at the same time that creating spaces/evading markers and coming closer to the goal. A curve sprint can be defined as “the upright running portion of the sprint completed with the presence of some degree of curvature” (Caldbeck, 2019) and could be considered “hybridization between straight sprint and change of direction (COD)” (Filter et al., 2019). All this new information has important practical implications for training and testing, which traditionally has been focused on linear sprinting.

Traditionally, sprint capacity in football has been measured by means of straight trajectories. However, as previously shown, these sprints rarely happen during the game. To resolve this problem, from the FSI research department a new curve sprint test for football players has been proposed (Filter et al., 2019). This new curve sprint test is mainly characterized by its reliability, specificity and simplicity. This test can be easily and precisely performed in the arch of the area, within a radius of 9.15m (official FIFA radius) and a distance of 17m. In the video below more information about the practical procedures of this test is shown.

“This new curve sprint test is mainly characterized by its reliability, specificity and simplicity”

For more detailed information, sprinting testing and training is fully covered in our Master in Strength and Conditioning in Football by top specialists in the world as JB Morin or Irineu Loturco.