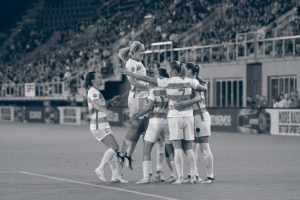 The best attacking and most expensive players in professional soccer are those that can score a substantial number of goals. Identifying those traits that may predict goal scoring success should be of immense interest to players, coaches, talent scouts, and professional soccer clubs (Ali, 2011). Exploring the predictors of success in specific functions, such as goal-scoring success, requires the use of inter-individual analyses of performance. These analyses are commonly used in evolutionary biology (Kingsolver et al., 2001) and recent application in soccer have demonstrated their utility (Wilson et al., 2019). Dribbling speed is considered critical to the outcome of soccer matches, and a previous study (Wilson et al., 2019) showed that a multidimensional metric of dribbling speed was a strong predictor of individual attacking performance when the objective was to take on and beat a single defender. Similarly, dribbling speed seems to be a strong predictor of an individual’s goal scoring ability in more complex attacking scenarios which involve a defender, goalkeeper, and goal.

To identify the athletic and technical traits associated with goal scoring success when an attacker competes against a single defender and/or a goalkeeper.

After obtaining data from dribbling, sprinting, and technical dribbling tests in 23 elite male junior players, the authors observed that:

Dribbling speed is an important technical aspect, being able to discriminate between players from different playing levels. Focusing on identifying the best training methods to effectively improve dribbling skills seems to be a smart strategy for soccer coaches and players. Focusing on a technical skill like dribbling is likely to result in substantial improvements in player performance.