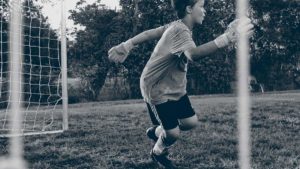 Beyond Distance: A Simple Qualitative Assessment of the Single-Leg Hop Test in Return-to-Play Testing.

This study on competitive football (soccer) players found that a 2D qualitative assessment performed through a scoring system based on the video-analysis of sagittal plane joint kinematics (0/2 (inadequate), 1/2 (partially adequate), or 2/2 (adequate)), correlated with the stiffness of the landing measured by the vGRF on a force platform. Thus, this qualitative scoring system effectively identified stiff landings in the SLH for distance test and could be a user-friendly method to assess athletes’ movement quality.

This study examines fatigue changes 48 hours after 90-minutes of competitive match-play in 18 elite English Championship football players over a season, finding increases in blood CK (49%), and decreases in CMJ performance (2.4-7.4%), these related with the high-intensity running match data.

This study analyzed 76 complete individual match observations, 36 from the follicular and 40 from the luteal phase in 15 elite female soccer players. Very high-intensity running distance was significantly greater during the luteal phase compared to the follicular phase, but this finding was accompanied by large variations across matches, so the results suggest that the menstrual cycle phase does not influence match physical performance of female soccer players to a significant degree, and at present, interventions or other methods of coping with menstrual cycle phase do not seem necessary on a group/team level to maximise competitive physical performance.

The influence of the offside rule on players’ positional dynamics in soccer small-sided games.

Do elite soccer players cover less distance when their team spent more time in possession of the ball?

Immediate effects of an acute bout of repeated soccer heading on cognitive performance.

In this study, 30 recreational male soccer players were divided into three groups that undertook 20 consecutive headers with a soft (8.8 psi), hard (16.2 psi), or no (control) ball. Heading negatively influenced one indicator of a suspected concussion (King-Devick), as well as the working memory that is essential for daily life. These findings contribute to the growing debate surrounding heading safety.

Negative Effects of Mental Fatigue on Performance in the Yo-Yo Test, Loughborough Soccer Passing and Shooting Tests: A Meta-Analysis.

This systematic review on PubMed, Web of Science, ScienceDirect, and Embase selected 12 articles investigating the effects of ACWR on male elite footballer injuries. All studies were of poor quality, and all of them applied rolling average ACWRs, exploring 1:2, 1:3, and 1:4-week load ratio windows. Differences in data grouping, inference or regression analysis, and other statistical methods were noted, so displaying important methodological heterogeneity.

Linear Advancing Actions Followed by Deceleration and Turn Are the Most Common Movements Preceding Goals in Male Professional Soccer.

This study on data collected through time-motion analysis from soccer players participating in the English Premier League found that the most common individual movement preceding a goal was a linear advancing motion (32.4 ± 1%), followed by deceleration (20.2 ± 0.9%) and turn (19.8 ± 0.9%). Actions also involved were change in angle run (cut and arc run), ball blocking, lateral advancing motion (crossover and shuffle) and jumps. In 82.9 ± 1.5% of player involvements there was at least 1 high intensity (HI) movement with assistant showing the lowest percentage and defender of scorer the highest.