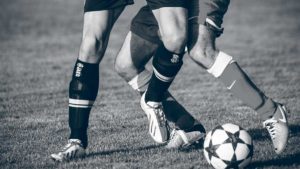 This study on 124 youth soccer players found that the final velocity attained at 30-15 Intermittent Fitness Test (VIFT) correlated with the height and body mass of the players, the CMJ performance, the maximal sprint speed in 30m, and COD time. The anaerobic speed reserve (ASR) in this test had less correlation in general with these variables, suggesting that ASR is an independent variable that should be considered for inclusion in information for characterizing players’ capacities.

This study by questionary in 56 Portuguese professional soccer teams found that after home matches, stretching, active recovery, cold-water immersion, and massage were used with higher frequency in later (12-72h) postmatch periods, more than immediately after the game. Conversely, the use of compression garments was higher immediately after away matches, with the rest of recovery measures being used in later periods, what reflects that recovery methods are not applied uniformly along postmatch periods and differ depending on the match location.

The Role of Crowd Support on Home Advantage during COVID-19 Restrictions on Italian Football Competitions. Comparison between 2018-19 and 2020-21 Seasons of the Italian Serie A and Serie B Championships.

This study compared the home advantage (HA) in last three seasons of the Italian football championship A-B series, analysing a total of 2.964 individual game scores. The number of penalties was lower in the season with a crowd compared to one without a crowd. The HA did not disappear in empty stadiums, so there must be other contributing factors. Additionally, we found that the referees were biased by the presence of the crowd in favour of the home teams, and this result could be considered by the football association during referees’ training and formation.

Influence of the Weekly and Match-play Load on Muscle Injury in Professional Football Players.

This study in 40 male professional football players of who 19 suffered 31 non-contact muscle injuries during matches found a greater distance covered at 21-24 km/h and at>24 km/h over the 5-min period prior to the injury, than in matches without injury, and a cumulative sRPE and training volume in the week prior to the injury compared with a control week, suggesting that the combination of a training week with a high load and a short period of high intensity running during the match might increase the risk of muscle injury in professional footballers.

The medical examination (“medical”) is an important procedure in professional soccer since it has high economic relevance. In the present study, 69 newly assigned players (age 18-35 years) from a professional soccer club underwent MRI (3.0 T) of both knee joints during their “medical”. Based on the established “Whole-Organ Magnetic Resonance Imaging Score” (WORMS), two independent radiologists graded the MRI results, and found that players with previous knee injuries (anamnesis and “transfermarkt.com” database) had significantly higher scores than players without reported injuries (22.1 ± 17.7 vs. 8.9 ± 4.4 points), and that the WORMS score correlated and predicted days missed due to injury, concluding that MRI WORMS score is a robust and reliable method to determine previous injury occurrence and severity during soccer “medicals”.