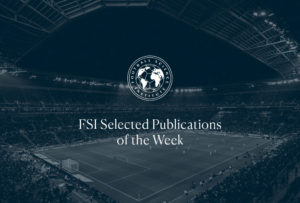 1. Why the Chosen Ones May Not Always Be the Best Leaders: Criteria for Captain Selection as Predictors of Leadership Quality and Acceptance.
Butalia R(1), Fransen K(1), Coffee P(2), Laenens J(1), Boen F(1).

In football, team captains are usually selected based on non-leadership factors such as team tenure, technical abilities, or salary. In the present study surveying 450 coaches and 198 players from Flemish football and volleyball teams, the results consistently indicated that captains who were selected for having good motivational and social competencies were given higher ratings on perceived leadership quality and acceptance by the players.

Professional male footballers participating in Serie A in 11 consecutive seasons (2008/2009-2018/2019) were screened to identify Achilles Tendon Ruptures (ATRs) through the online football archive transfermarkt.com. 11 ATRs were found in 11 footballers with a mean age of 29.8 ± 4.4 years, meaning an overall incidence rate of 0.007 injuries per 1000 hours of play. All players returned to play soccer and participated in an official match after a mean of 274 ± 98 days; however, after 2 seasons, up to 40% players decreased their level of play by reducing the number of games or playing in a lower Division.

This paper analyzes the mortality hazard ratio of 1333 Spanish male players born before 1950, and who played in elite leagues from 1939, compared with the Spanish population. Players showed significantly lower mortality than the general population, but this advantage decreased with advanced age, disappearing after 80 years. Unadjusted median survival time was 79.81 years. Continuing their career as coaches after retirement from playing did not confer further benefits in longevity.