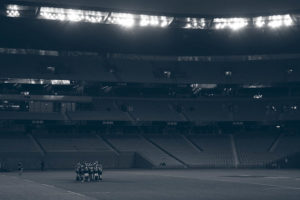 4 Super League matches in which SARS-CoV-2 positive players were subsequently found to have participated were analysed. Despite tackle involvements and close proximity interactions with SARS-CoV-2 positive players, in-match transmission was not confirmed after 14 days of follow-up, suggesting rugby presents a lower risk of viral transmission than previously predicted.

The association between a serum marker of muscle damage [creatine phosphokinase (CPK)] and the isometric strength of the adductor muscles after games was evaluated in 30 professional football players during two seasons of the russian national top-level championship, finding a significant negative association between the two variables. Along the 72h post-game, CPK levels decreased in association with the muscle strength recovery, with the strength/CPK ratio displaying a U-shaped curve..

To investigate the relationship between the internal training load (TL = rate of perceived exertion × training time) and wellness index (WI) in soccer, the WI and TL data were recorded from 28 subelite players throughout the 2017/2018 season. A significant correlation was reported between daily TL and WI measured the day after, and the machine learning approach used in this study can be used to predict the WI of the players based on a targeted weekly TL.