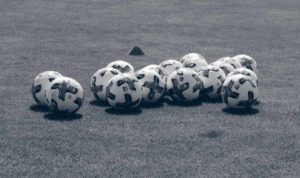 This systematic review with meta-analysis of 16 Randomized clinical trials (RCTs) assessing the effects of caffeine on the performance of soccer players found no differences reported between caffeine and placebo when assessing soccer-related performance parameters such as aerobic endurance, time to fatigue, vertical jump, repeated sprint tests, reaction time agility test, and rating of perceived exertion. However, a few minor adverse events from caffeine were reported.

This study in 16 professional soccer players finds relationships between the maximum speed reached (VIFT) during the 30-15 Intermittent Fitness Test, the players’ hemoglobin levels, and the training load measures during standardized 3 vs. 3 Small Side Games SSGs. Large-to-very-large relationships were found between VIFT and external loads: TD and MW. And moderate-to-large negative relationships were found between hemoglobin levels and internal loads: Edwards’ TRIMP, %HRmax, and red zone. The use of SSGs protocols as a monitoring complement of the 30-15IFT is suggested.

Betaine (Trimethylglycine – TMG) supplementation (2 g/day) increased testosterone levels and T/C ratio in 15 youth professional soccer players (age 15 years) during a competitive season, with no negative effects on growth (height and weight) and so may attenuate reductions in testosterone due to intense training during puberty.

External Load EL (total distance covered; high-speed running distance; number of accelerations and decelerations) and Internal Load IL (RPE) were assessed in 18 elite female soccer players from a Spanish 1st Division team during one season. The EL and the IL from official matches were higher compared to training sessions. In matches, the EL was greater in Attackers and Central Midfielders versus Central Backs, while during training sessions, the EL was similar between playing positions.

Training and match load, and CK values were measured on 41 U16-U17 youth national team soccer players over an 18-month period. The prediction Load-CK models fitted similarly during games and training sessions, but the accuracy was better during training sessions. Position-specific differences were found in the load parameters, which best explained the CK changes, indicating that relationship between external/internal load parameters and CK changes are position-specific and might depend on the type of session (training or match).

Study of 151 soccer, handball, and basketball players with KT-1000 arthrometer at 6-month after anterior cruciate ligament reconstruction (ACLR) using bone-patellar tendon-bone graft, and follow-up for 25 years average, showed that the n = 20 with a slightly loose graft (3 to 5 mm increase from the uninvolved side), despite a rate of return to preinjury level of sports similar to those with tight grafts (<3mm), showed a median duration of the sports career shorter (2 vs 6 years), more need of surgical revision (30 % vs 6%), permanent increased anterior laxity, and an inferior Lysholm score.

This study in 17 professional female soccer players found nearly perfect associations (r > 0.9) between linear and curve sprint (CS) velocities, and both were significantly correlated with the jumping ability, suggesting that both may benefit from the implementation of plyometric exercises. For change of direction (COD), players faster in linear and curve sprints exhibited greater COD deficits, and no significant associations were found between these deficits and either body mass, sprint momentum, or jumping ability, suggesting a different mechanics and training methodology for the COD.

This study in 23 female soccer players from a Spanish professional club divided into three training groups: small-sided game group (SGG), eccentric overload group (EOG) and a control group (CG), found that the SSG training obtained mainly improvements in variables related with efforts repetitions and the capacity of minimize the accelerations ACC and decelerations DCC deficit at the end of the games, while the EOG training was related to increments in the intensity of ACC and DCC.