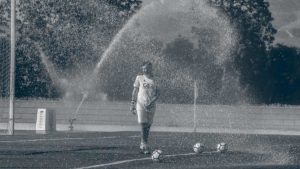 1. A Review of Legal, Ethical, and Governance Issues for Team Doctors

Faculty of Medicine and Health, University of Sydney, Sydney, Australia

This paper analyzes media reports, legal cases, and journal articles describing recent sporting integrity crises that have involved medical issues and governance reforms which are emerging in response. A key issue is that while doctors bear ultimate responsibility for any perceived medical negligence, they do not always have ultimate power in decision-making. This is common in the traditional governance structure where the coach/manager “outranks” the doctor and can overrule medical decisions. Conflicts of interests occur when the needs of the employer/sporting organization differ from the player (patient). Sporting organizations must continue to implement and strengthen frameworks reinforcing doctors’ seniority in the medical area.

2. Effects of Whole-Season Training and Match-Play on Hip Adductor and Abductor Muscle Strength in Soccer Players: A Pilot Study

In this study, 25 elite football players were monitored with GPS during 20 SSGs formats and 25 official-matches, and also subjected to a submaximal Yo-Yo test. The SSGs demands showed poor internal and external responsiveness to the training-induced aerobic adaptations as assessed by submaximal Yo-Yo, but large to very large correlations (r=0.53 to 0.90) were found between SSGs and official match demands across the season. SSGs should not replace standardized field tests to detect the training-induced aerobic adaptations. However, SSGs could be confidently used to recreate specific contextual factors in elite football players.

In this study, 20 male participants performed a 30-min downhill run (DHR) to elicit exercise-induced muscle damage (EIMD) and were equally assigned to a control (CON) and an experimental group (HEAT). HEAT group received three consecutive days of heat exposure (45min of hot water immersion at 42  °C) prior to DHR. Pre-heat treatment decreased the magnitude of strength loss and muscle soreness, as well as attenuated the decline in microvascular function following EIMD. Heat treatment appears a promising pre-conditioning strategy when embarking on intensified training periods or competition.

5. Guardiola, Klopp, and Pochettino: The Purveyors of What? The Use of Passing Network Analysis to Identify and Compare Coaching Styles in Professional Football

This study compared metrics in the passing networks of Jürgen Klopp, Pep Guardiola, and Mauricio Pochettino across 92 games of the UEFA Champions League seasons from 2017 to 2020. Higher average shortest-path length, density, linear transformation eigenvalue, and centrality dispersion were found for Guardiola’s network.  Cohesion characteristics among players in the three teams of the top coaches seems to characterize their own footprint regarding passing dynamics. Guardiola stands out by the high number of passes and the enhanced connection of the most important players in the network. Klopp and Pochettino showed important similarities, which are associated to preferences toward more flexibility of interpersonal linkages synergies.

6. Predictors of time to return to play and re-injury following hamstring injury with and without intramuscular tendon involvement in adult professional footballers: A retrospective cohort study

This study of 35 Hamstrings Strain Injuries HSI experienced by 24 players of one English Premier League football club over the 4 seasons found that there was a difference in time to return to play (TTRTP) between British Athletics Muscle Injury Classification BAMIC grades 1a and 2c, but not between 2b and 2c. Grade of HSI and removal of the player were predictors of TTRTP, with each increase in grade resulting in an additional 3 days of TTRTP, and being removed, an additional 11 days.

This study analyzed the mechanisms, situational patterns and biomechanics (kinematics) of 57 consecutive MCL injuries across two seasons of professional soccer matches. 62% injuries were direct contact, 24% were indirect contact and 14% were non-contact. Three main sprain mechanisms were noted: (1) direct contact/blow to the knee, (2) contact to the leg or foot (lever-like), and (3) sliding. 73% of MCL injuries occurred during two main situations: (1) pressing/tackling, and (2) being tackled. For indirect/non-contact injuries, knee valgus loading (100% of cases), hip abduction (73% of cases) and external foot rotation (92% of cases) were prominent injury kinematics, often with lateral trunk tilt (median, 10º, 64% of cases) and rotation (65% of cases). Knee flexion angles were higher for indirect/non-contact injuries (median, 100º) than direct contact injuries (median, 22º).

In this study, a total of 100 patients aged 13 to 35 years with complete midsubstance anterior cruciate ligament injuries were randomized to receive a suture repair augmented with an extracellular matrix implant (n = 65) or an autograft ACLR (n = 35). Patients undergoing the BEAR procedure had better International Knee Documentation Committee Subjective Score at 6 months after surgery (86 points vs 78 points), and better Knee injury and Osteoarthritis Outcome Score-Symptoms subscale scores at 1-year postoperative time point (88 vs 82). At 1 year after surgery, approximately 88% of the patients in the BEAR group and 76% of the ACLR group had been cleared for return to sport.