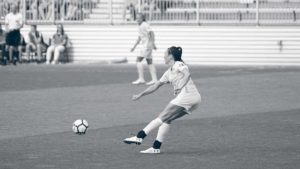 1. The Relationship Between Performance and Asymmetries in Different Multidirectional Sprint Tests in Soccer Players.

2. Scanning activity of elite football players in 11 vs. 11 match play: An eye-tracking analysis on the duration and visual information of scanning

This study examines the visual exploratory scanning of 4 elite football midfield players in an 11 vs. 11 real-game environment using mobile eye-tracking technology. The players’ scanning duration was influenced by the ball context and the action undertaken with the ball, with the players including more opponents than teammates inside the video frame. Fixations were found in only 2.3% of the scans, being the stop point the most information-rich part of a scan.

In this study, workload (high-intensity running distance) and neuromuscular performance capabilities (isometric knee extension: peak force, rate of force development, and peak twitch force) of 12 professional soccer players were assessed weekly over a 6-week in-season mesocycle. There were fluctuations in neuromuscular performance capability over the mesocycle that reached statistical and practical (13.3% [peak-to-peak]) significance alongside inter-week heterogeneity in workload, with congruence between the high-intensity running workload and the peak force and rate of force development fluctuations.

In this study in 2 male teams and 1 female team, two conditions of the same training session were analyzed: in one of them, coaches maintained a passive verbal attitude, whereas in the other session coaches intervened with an active attitude through continuous general encouragement. Increases in performance satisfaction, mental effort, and RPE values were detected associated with encouragement interventions. Nevertheless, the external physical load did not show clear differences.

This study examines the effects of shuttle-run-based high-intensity intermittent exercise (HIIE) performed at the same relative speed (100% PST-CAR on Carminatti’s test) on sand and grass in 7 male junior soccer players. The sand condition elicited significantly higher %VO2peak, %HRpeak, RPE, and Lactate. This study showed that higher internal workloads are experienced by the players during a single HIIE session performed on a softer surface like sand, even when the exercise intensity was individualized based on 100%PST-CAR on each surface.

In this study, the stiffness (with the MyotonPRO® device) and vibration disappearance threshold (with a tuning fork) were measured in 8 professional soccer players with a previous history of hamstrings strain and 8 uninjured players, finding that the tissue stiffness was higher, and the vibration disappearance threshold was lower in the previously injured legs, compared with the uninjured legs and the legs of the uninjured players, suggesting that tissue stiffness and vibration sense could be a useful and feasible evaluation for chronic muscle strain conditions.