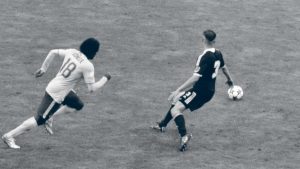 This study assessed clinically the vision of 59 Referees and Assistant Referees who officiated at the highest level in Portugal across the 2014 to 2017 seasons. The R and AR groups did not differ in vision or visual perception measures, but it was found that better stereoacuity and visual memory are associated with a higher rank order of eligibility in the classification made by the Portuguese Soccer Federation. Together, these two measures explained 22% of the variance in rank-order performance.

This study investigated energy transfer strategies of 15 semi-professional players performing instep kicks for speed and accuracy with 3-D kinematics and GRF data that were incorporated into segment power analyses. Energy transferred from the support leg and torso into the pelvis during tension arc formation and leg cocking was redistributed to the kicking leg during the downswing and was associated with faster foot velocities at ball contact. This highlights whole-body function during instep kicking and suggests that resistance exercises that replicate these interactions may help develop more powerful kicks.

3. Effects of Age on Match-related Acceleration and Deceleration Efforts in Elite Soccer Players

4. The origins of goals in the German Bundesliga