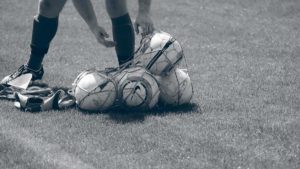 1. Associations between Hamstring Fatigue and Sprint Kinematics during a Simulated Football (Soccer) Match

In this study in 10 amateur football players, hamstrings maximal voluntary torque and  20m maximal sprint time were significantly reduced by 7.5% and 14.3% at the end of a 90-minute running-based football match simulation. Decreases in peak knee extension and increases in the peak combined knee extension and hip flexion angle during the final part of the swing phase were also found, and correlated with the hamstrings torque loss, indicating a reduced capacity of the hamstrings to decelerate the lower leg when fatigued, which would increase hamstring strain injury risk in football.

2. Effects of respiratory muscle training in soccer players: a systematic review with a meta-analysis

This systematic review with a meta-analysis analyzed the existing evidence on the effects of respiratory muscle training in soccer players, which was found to provide a significant improvement compared with regular training in maximal inspiratory buccal pressure and maximum consumption of oxygen, even though the quality of the evidence was rated as low or very low.

3. Symmetry does not Indicate Recovery: Single-leg Hop Before and After a Lower Extremity Injury

In this study, 236 adolescent athletes completed the single-leg hop before the beginning of the season (pre-injury). 44 of them sustained a lower extremity injury during the season. Injured limb single-leg hop distance significantly decreased at return-to-play with a mean decrease of 48.9 centimeters from pre-injury, but the uninjured limb also significantly decreased, with a mean decrease of 33.8 centimeters, so limb symmetry did not significantly change pre- to post-injury with a mean difference of 1.5%, indicating that using the uninjured limb as a comparison for hop testing at the return to play level should be taking with caution.