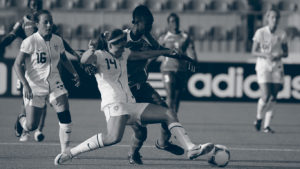 This study compares a foot-mounted inertial system (PlayerMaker™) to three commercially available Global Positioning Systems (GPS) for the measurement of 12 soccer players in a soccer simulation. The PlayerMaker™ measured higher total distance compared to the three GPSs, explained by greater distances measured in the 1.5-5.5 m/s zone, and with no systematic differences – so good reliability – between two PlayerMaker™ systems worn at the same time by 7 of the players.

2. When do soccer players experience the most demanding passages of match play? A longitudinal study in a professional team.

This study analyzed the tracking data of a professional soccer team, showing that the first period of the match (0′-15′) was the interval with the greatest % of cases in which the players achieved the most demanding passages (MDP) of play for all the variables distance, sprinting distance, high-metabolic load distance, and the total of high-intensity accelerations and decelerations, with no differences between playing positions, except for the distance covered by the fullbacks that has the most frequent MDP within the second period of the match (15′-30′).

3. Goal Side Selection of Penalty Shots in Soccer: A Laboratory Study and Analyses of Men’s World Cup Shoot-Outs.

This paper reports two studies examining the tendency for soccer penalty kickers to select the goal side with the largest area to the left or right of the goalkeeper’s veridical midline when the goalkeeper stands marginally off-center. In Study I, in laboratory conditions with realistic images, kickers tended to choose the left over the right goal side, but this tendency was modulated with the manipulation of the goalkeeper’s position along the goal line and the kicker’s viewing position. In Study II, 100 penalty shots from men’s world cup shoot-outs between the years 1982 to 2018 were analyzed and again it was found a small tendency for kickers to aim the ball to the left goal side, but with barely any modulating effect of changes in the goalkeeper’s and kicker’s position, suggesting that standing marginally to the left or right of the center of the goal does not influence the direction of the kicker’s shot at least in elite football competition conditions.

4. Concussion in European professional football: a view of team physicians.

This observational study based on an electronic survey conducted among 96 physicians working for professional football clubs in Belgium, England, and France, concluded that most of the physicians were in favor of informational sessions about concussion for players or technical staff, in favor of an additional temporary and permanent concussion substitutions, and in favor of the availability of instant video footages (side-line) to ease the recognition of concussion.

This study used positron emission tomography PET to assess quadriceps muscle blood perfusion before and after 10 min of cold water immersion at 8°C, 15°C, or 22°C in 30 healthy men of 33 ± 8 yr age, finding that global quadriceps perfusion did not change beyond a clinically relevant threshold in any condition, although regionally there was a clinically relevant increase in vastus intermedius perfusion after immersion at 8°C, and a decrease in rectus femoris perfusion at 15°C.