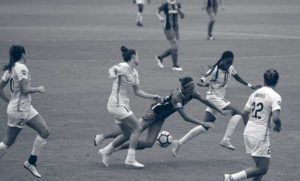 17 May FSI Selected Publications of the Week

This analysis of 35 ACL injury videos in matches of 6 top female leagues across 3 seasons (2017-2020) by three independent reviewers found 54% noncontact, 34% indirect contact, and 11% direct contact injuries. In noncontact/indirect contact injuries there were 3 situations: (1) pressing and tackling (62%), (2) regaining balance after kicking (24%), and (3) being tackled (13%). Biomechanical analysis in 29 of the videos indicated multiplanar mechanisms with frequent knee valgus loading (88%). Additionally, 64% of injuries occurred in the first half of matches and most frequently within the first 30 minutes. This findings suggest that prevention strategies should consider interventions to lessen risk in high-intensity defensive play and at the beginning of a match, alongside appropriate neuromuscular training interventions to control valgus loading.

This study is based on answers collected over a 3-year period from 2875 Swedish competitive football players, 1762 (61%) males and 1113 (39%) females. ACL injuries were more frequently sustained during games (66%) than during practices (25%). The risk of ACL injury was highest early in the football game, with 47% sustained during the first 30 min and 24% in the first 15 min. Players changing to a higher level of play had a higher rate of ACL injuries than players changing to a lower level, especially in female football players. 15% of the male and 21% of the female ACL injuries occurred in teams with a coach change during the season. 40% of the players reported that they did not plan on returning to football.

In this study 69 youth footballers performed 72 11 versus 11 trials of attack versus defence, in a counterbalanced crossover design. Players’ position data captured using a local positioning system showed that using a high-press defending strategy leads to: closer inter-team distance; larger dispersion, due to a longer team length; and larger inter-line distances between defenders, midfielders, and forwards. The resulting effects on the attacking team include reduced ball possession time; larger individual areas for attacking midfielders and forwards; longer team length; and more penetrative passes performed. Consequently, high-press has some trade-offs to be consider.

To address a regular problem encountered by practitioners, the issue of missing Training Load TL data, in this study session rating of perceived exertion (sRPE) data from 10 male professional soccer players were collected over a 32-week season, and some data randomly removed, substituted by different missing value imputation (MVI) methods. The best-fitting MVI method was Daily Team Mean (DTMean), so its use can be a practical and effective approach to addressing the negative consequences of missing TL data.