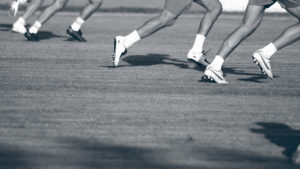 Development and monitoring of players’ sprinting capacities have received considerable attention in research literature over the years. Effort has been made to unravel and reveal underlying mechanical determinants for sprint performance, as such variables provide insights into individual biomechanical limitations.

Theoretical maximal velocity (v0), horizontal force (F0), horizontal power (Pmax) and force-velocity profile can be calculated from the model by derivation of the speed-time curve that leads to horizontal acceleration data. In fact, Fv profiling allows an individual analysis and development of training programs that target the major limiting factors.

However, group homogeneity can limit the effectiveness of this approach, as players within a team can be clustered around a limited range of the entire spectrum of mechanical sprint running profiles. Therefore, the aim of this study was to quantify possible differences in sprint mechanical outputs in soccer as a function of playing standard, playing position, age and sex.