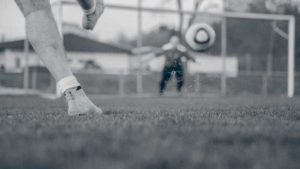 Elite football is characterized by high physical demands and frequent changes in exercise intensity. In the context of the game, each player performs ~1000-1400 short activities, with changes every 4-6 s, and high-intensity running actions approximately every 70 s (Stolen et al.,2005). Thus, sprint speed and power play a determinant role in elite football. Previous studies have reported that both speed and power can be regarded as important indicators of soccer performance, with top-level players usually being faster and more powerful than their less specialized peers (Coen et al., 1998; Arnason et al., 2004). Despite this evidence, there is a need to examine the frequency of these fast and powerful activities in the most decisive moment of the match: the goal situation.

After analyzing 409 goals recorded during the second half of the season (2007/08) in the first German National League the authors observed that:

Straight sprinting was the most frequent powerful action prior to scoring goals in elite football, for both scoring and assisting players. Other speed-power actions such as jumps, rapid rotations and directional changes were shown to play an important and decisive role in elite football performance.