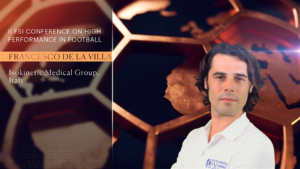 Football Anterior Cruciate Ligament injuries mechanism reloaded: how, where and when

How do ACL injuries occur in football? The most typical ACL injury mechanisms are non-contact (44%) in which players get injured in their interaction with the environment (important role of deceiving actions/distractions) and indirect contact (44%, mechanical perturbation), with direct injuries (12%, tackling/tackled) being the least frequent.

Two aspects of ACL injuries are important: the mechanical aspects (body biomechanics) and neurocognitive (sensorimotor errors) perturbation. Regarding situational patterns, 68% are defensive, where 47% occur while pressing/tackling (with or without reaching, characterised by neurocognitive perturbation), 20% while being tackled (during duels, due to upper or lower-body perturbation), 16% while regaining balance after kicking (important rotation component), and 7% while landing from a jump (not critical in football).

Regarding biomechanics in the frontal plane, an omolateral tilt with contralateral rotation of the trunk, abducted hip, knee valgus, and foot planted with external rotation after a heel or flat strike is shown. In the sagittal plane, impact absorption relies mostly on the lower part of the limb (knee and ankle) from initial contact to injury frame with no absorption at the trunk or hip. Where and when do they occur?

When compared to men, there is a higher non-contact (54%) and lower indirect contact (34.5%) prevalence of ACL injuries in female football with two main patterns: pressing or tackling (58%) and regaining balance after a kick (23%).

Finally, after ACL reconstruction, those who suffer a non-contact injury had the highest risk of a second ACL injury (42% suffering a second injury): the most important risk factor of re-injury.