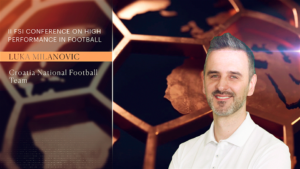 Long-term athletic development (LTAD) is a process over several years in which strength training is carried out from a young age. It is an important capability as it is correlated to jumping, sprinting, agility and a decreased injury rate.

An optimal amount of stimuli in the long term has to be placed on the player for the body to be able to adapt to it. This can be achieved through the inclusion of a few exercises in which load is gradually increased and through targeting basic movements (pushing, pulling, deadlifting, squatting and carrying), not muscles.

The phases of LTAD can be categorized into the following 4 simple phases: (1) Humans (0-10yrs: train for natural movements). Importance of learning different movement patterns, basic movement techniques (walking, running, starting, stopping, jumping), and as many sports as possible in a positive, fun, and competitive way. A prerequisite for every ability, especially strength. (2) Athletes (10-16yrs: athleticism). Can be divided into athletes 1 (10-13yrs) and 2 (13-16yrs). In 1, biological-chronological age should be considered. Skill development is critical and bodyweight strength can be introduced.

In 2, change of directions and Olympic lifts can be included and some external load to strength training introduced. (3) Players (16-20yrs: performance). More individual programs before training sessions (“pre-formance”) and some strength exercises such as hip-thrusts (important for glute strength) can be included. They can be performed daily, varying the load through the week in a progressive and logical way. Champions (>20yrs, performance continuation). Transform the strength into power.

Resisted speed, specific agility, and plyometrics can be further trained. Everything done before this phase is a prerequisite to this kind of more complex and effective training. Q: Is there the possibility of including Olympic lifts later in your career? It’s never too late, because it is a skill that can be learned and developed at any time.