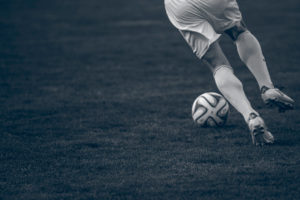 Linear sprint, change of direction (COD), and vertical jump performances play key roles in soccer. These capabilities can be improved through the use of various training strategies (Salaj and Markovic, 2011). Among the different approaches, resisted sprint training (RST) has been shown to be an effective method for enhancing physical performance (Alcaraz et al., 2018). There are different types of RST, and the main difference between them is the direction of the applied resistance (e.g., vertical or horizontal) (Alcaraz et al., 2008). RST allows the production of substantial amounts of force at high velocities, thus inducing functional enhancements in different explosive actions (e.g., jumping, sprinting, COD) (Suchomel et al., 2016). Specific performance also relies on the ability to apply these forces with orientations similar to those required by the mechanical demands of the task (Sale, 1981). Therefore, it is probable that both vertically (using weighted vests) and horizontally (using a portable robotic resistance device) overloaded RST, and the combination of both, may improve the physical performance of soccer players.

The purpose of the study was to analyze and compare the effects of different RST modalities (e.g., vertically- and horizontally-oriented RST) with loads ranging from 10 to 20% of the body-mass (BM) on the performance of youth soccer players after 8 weeks of linear and COD sprint training.

After analyzing the changes in physical performance after 8-weeks of vertical, horizontal, or combined (vertical + horizontal) RST, and unresisted sprint training in 60 youth soccer players, the authors observed that:

The application of both horizontal and vertical resistance in RST may improve sprint, COD, and jump performances. A vertically-oriented load (with weighted vests) promoted the greatest improvements in both sprint and COD ability and had a positive additional effect on vertical jump height.