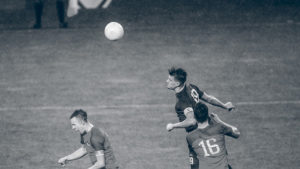 Football is the only sport where a player uses their head to intentionally strike the ball during the course of play. At all levels of play, concussions are more likely to occur in the act of heading than in other actions of the game. While concussion from heading the ball appears to be rare in adult players, some data suggest that children are more susceptible, potentially due to biomechanical factors, less developed technique, and the susceptibility to injury of the immature brain (O’Kane, 2016).

“At all levels of play, concussions are more likely to occur in the act of heading than in other actions of the game”

Overall, current evidence seems insufficient to support a complete ban of heading in children’s football, but until more solid data is available, heading probably should not be started before children confirm to be ready to do so (Spiotta et al, 2012). Then, heading should be introduced stepwise and controlled using structured heading training focusing on technical aspects, and technique should continue to be improved at all levels of play. Proper heading technique, which involves stabilization of the neck musculature as well as the torso to reduce rotational forces, may protect soccer players from possible deleterious effects (Tysvaer, 1992).

In this speech, our professor Tim Meyer (team physician of the German National Football Team and Institute of Sports and Preventive Medicine, in Saarland) sheds light on heading injuries, repeated heading and their consequences on the football players. This topic gained popularity after the 2014 World Cup when the player Christoph Kraemer suffered a concussion and the media mixed different concepts without categorizing them properly, something that according to Dr Meyer should be done into three different subtopics:

There is no clear evidence about what to do with heading in children. However, as a consequence of judicial proceedings of families against the United States Soccer Federation, it was decided to ban heading up to the 11 years old and restrict heading up to the 13 years old. This rule is only applied in the US, as the rest of the world is waiting for clear findings before making decisions. Whether this should be at age 11 years or earlier needs to be determined (Tarnutzer, 2017). According to Tarnutzer, the effects of this limitation should still be evaluated, assessing if it has resulted in a reduced number of concussions and collisions, and if starting with heading at later age influence subsequent neuro-cognitive performance.

These head injuries are more frequent in other sports (i.e. boxing) than in football. Experts from the International Concussion in Sports Group have established how to manage these situations. The world of football should learn from them, taking decisions based on their recommendations. This group indicates the minimum recommended time off training and match-play for this injuries, but these recommendations are not always respected in practice.

“Experts from the International Contusion Sports Group have established the guidelines to manage the concussion situations. These guidelines are important to be systematically incorporated into the world of football”

CTE consist in a degenerative brain disease, associated with depression, suicidal tendencies and dementia. Normally they occur in other sports with higher prevalence of concussions (i.e. american football). Dr Meyer makes clear that there are no clear findings about the odds of CTE are higher in football than in the general population. However, more studies are needed on this topic.

HOW CAN COACHES AVOID THE RISKS OF HEAD INJURY AS A CONSEQUENCE OF HEADING REPEATS?

The skill levels of heading may not progress at the desired rate due to poor feedback (Shewchenko et al, 2005). The improved techniques can be realised through structured training and coaching but will require education of the practitioners and a direct measure of the head response for immediate feedback. Currently some entities use systems to suspend (foam-) balls to train the heading technique under safe conditions (i.e. Headrite sports).

The Football Science Institute considers that heading banned in younth soccer players is not the smartest solution to avoid dementias in old age. From a scientific approach, the best remedy is an adequate soccer academies coaches’ educational qualification with the aim of knowing the technical requirements and the safety measures of the heading maneuvers according to current research. The Football Science Institute offers Masters that show updated knowledge where our professors teach technical and preventive considerations of some actions such as, in this case, the heading.

Visit our expert opinion at Marca.com